The main series consists of several titles that feature Eikichi Onizuka as the protagonist. The first series, Shonan Junai Gumi (1990-1996), introduces us to Onizuka and his best friend, Ryuji Danma, as the Oni-baku duo at the height of their puberty. The story follows their quest to lose their virginity as they traverse through high school life in Shonan. The second entry, Bad Company (1996), serves as a prequel and chronicles the Oni-baku’s first meeting, as well as how the pair acquired their respective motorcycles. The third entry, and arguably the most well-known, was Great Teacher Onizuka (1997-2002), is set 6 years after Shonan Junai Gumi and focuses on a 22-year-old Onizuka as he becomes a teacher at a private middle school, Holy Forest Academy, in Tokyo, Japan. The fourth entry, GTO: 14 Days in Shonan (2009-2011), is a side story set during the events of Great Teacher Onizuka and explains Onizuka’s 14 day absence in which he spends in Shonan. The latest entry, GTO: Paradise Lost (2014-present), is set two years after the events of Great Teacher Onizuka and opens with Onizuka in prison as he narrates via flashbacks about his time teaching a class of celebrity students at Kissho Academy, and the events leading up to his imprisonment.

The franchise includes Black Diamond (2011), a direct spin-off of GTO: 14 Days in Shonan, focusing on the Twins of Terror, Riko and Miko Sakaki, as they tackle their first case as part of the Disciplinary Committee. A second spin-off, Ino-Head Gargoyle (2012-2014), features Onizuka’s long-time friend since high school, Toshiyuki Saejima, and his shenanigans as a policeman stationed at Inogashira Park. A crossover with GTO: 14 Days in Shonan, titled Goblin Made Dog (2012), pits Saejima and Onizuka against each other in a battle to win the heart of a female hostess at an exclusive club. A third spin-off, Great Transporter Ryuji (2012), follows the other half of the Oni-baku duo, Ryuji Danma, whose peaceful life as a motorcycle shop owner is turned upside down after the appearance of a strange girl.

Kamen Teacher (2006-2007) follows Gota Araki and Kamen Teacher, two new teachers hired to solve the problems of Kyokuran High in Tokyo, a school with a delinquency rating of 80%. A sequel, Kamen Teacher Black (2013-2014), follows a new teacher donning a black mask from the legendary Kamen Teacher Program as he helps reform the celebrity students of Hiiragi Gakuen, a prestigious private school in Ikebukuro, Tokyo. The Kamen Teacher series was confirmed to be set in the GTO Shonan Universe with the release of Kamen Police (2013), a crossover with Ino-Head Gargoyle in which Toshiyuki Saejima stumbles upon Kamen Teacher’s mask and dons the mask himself. The character of Kamen Teacher also makes an appearance in GTO: Paradise Lost, who is recruited to aid Onizuka with his jailbreak.

Animal Joe (2006/2008) follows Joe Kirishima, the womanizing vice-president of an investment banking firm in Roppongi Hills, Tokyo, and the lives he destroys due to his animalistic sexual urges. A sequel, RE: Animal Joe (2019), reboots the series in the modern era and confirmed its setting in the GTO Shonan Universe, leading to Joe’s appearance as a supporting character in GTO: Paradise Lost.

A spiritual sequel to Shonan Junai Gumi titled Shonan Seven (2014-2019), written by Tohru Fujisawa and illustrated by Shinsuke Takahashi, is set in the same high school attended by the Oni-baku. It features an entirely new cast and follows Ikki Kurokami, a first year who joins the Shonan Seven, group selected to represent their school to fight in an annual tournament to determine the strongest school in Shonan.

​Tohru Fujisawa’s first major hit, Shonan Junai Gumi, was serialized in October 1990 in Weekly Shonen Magazine. Early concept designs revealed Fujisawa intended the series to be titled Shonan Junai Boys. He based the manga’s setting at the seaside location of Shonan after growing up inland in Hokkaido. The story begins as a gag manga, but more serious issues present themselves as it continues, eventually striking a balance to what is later seen in its sequel, Great Teacher Onizuka.

As a member of the delinquent “Yankee” subculture himself, Fujisawa described school as a negative experience, especially in regards to its rigid structure and self-serving salary teachers only caring about their performance reviews. His works, especially Great Teacher Onizuka, drew inspirations from his personal experiences.

Onizuka's first name, Eikichi, was taken from musician Eikichi Yazawa and his design is based on the Yankee look. When writing Great Teacher Onizuka, Fujisawa was influenced by the style of Kohei Tsuka, one of Japan's most influential theater figures, and described his writing like directing. He originally intended it to run for 10 volumes, however, it was extended at the request of his publisher, Kodansha. As a result, Fujisawa began to run out of characters and would write chapters without Onizuka when faced with writer’s block.

In June, 2021, Fujisawa stated that GTO: Paradise Lost was intended to be the “last” manga in the GTO series once it was completed. 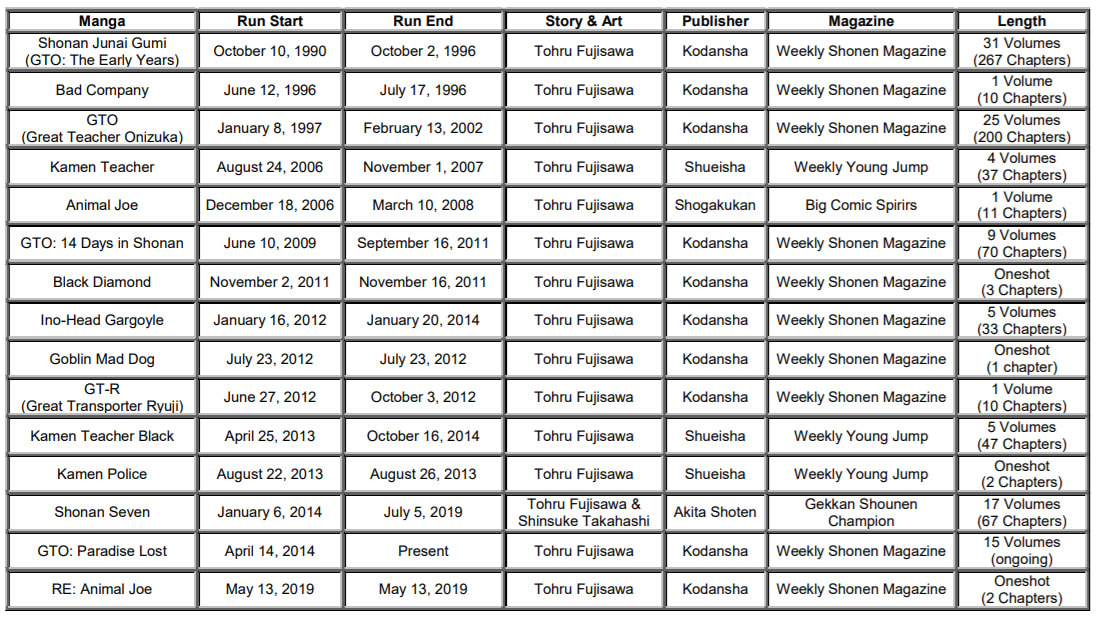 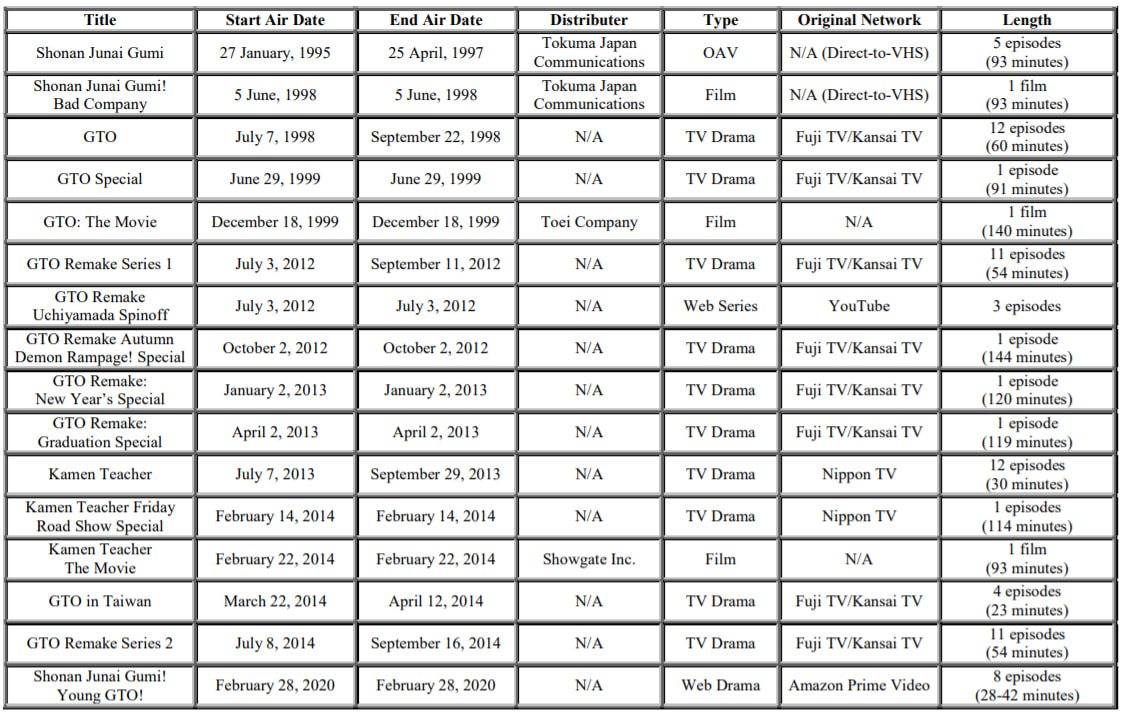